“A silent burial ground, where may be the ashes of wounded souls are still encircling. Broken pieces of brunt smashed tiles with countless busted glasses can tell the tale how staircases could not save hundreds of scorched living beings. Imagining myself at the place of these unfortunate garments workers who burnt alive, I felt vulnerable. Shoes, bangles or an unfinished ironed cloth in the stand or the half eaten evening tiffin are standing witness, how workers died helplessly. Pieces of glass bangles all over the floor, as mostly female workers had faced the tragedy, were witness of a violent disaster those no one of them even seen in nightmares. & thus by facing fire they lost their existence in burning blaze” – GMB Akash 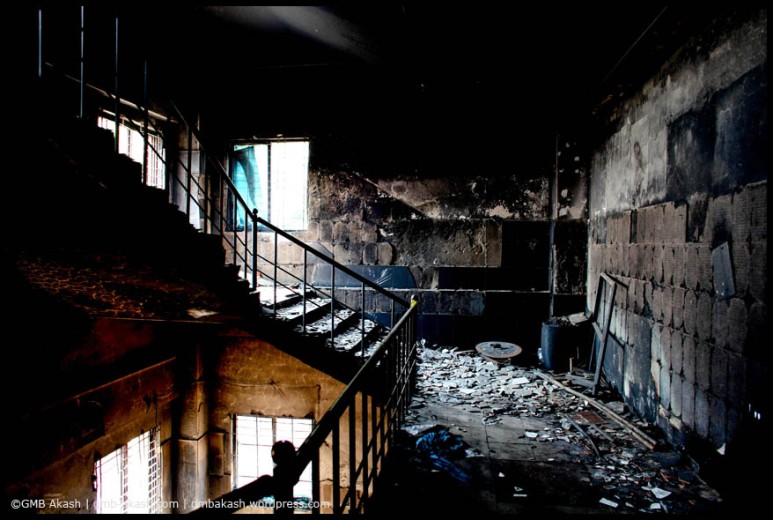 Tazreen Fashions, located in a rural area of Ashulia occupies a nine-storied building. The ground floor, which stored the factory’s raw materials, had the only entrance to the factory, with three staircases leading to other floors. The fire at the eight-story building of the apparel factory started on the first floor, quickly cutting off all three exits from the building. Survivors stated that at least one exit was locked while no emergency exits existed in the building whatsoever. Some workers tried to escape the fire by jumping out of the windows of upper floors – many of them died. Others choked to death in the thick smoke of burning fabrics. Many of the bodies the firefighters found in the ruins were burnt beyond recognition. Later it was estimated that more than 1,000 people could have been inside the building when the fire started. But survivors claims more. Even it takes more than two hours for fire fighters to arrive at the factory. Firefighters trying to reach the blaze were slowed because the narrow road leading to the factory made it difficult to get to the site and there was no source of water nearby. It took firefighters over 17 hours to douse the blaze at the factory, after it started on Saturday evening November 24. The fire at Tazreen Fashions Ltd, lead to the death of reportedly 111 workers, but witnesses and survivors alleged that the real number dead is possibly much higher. 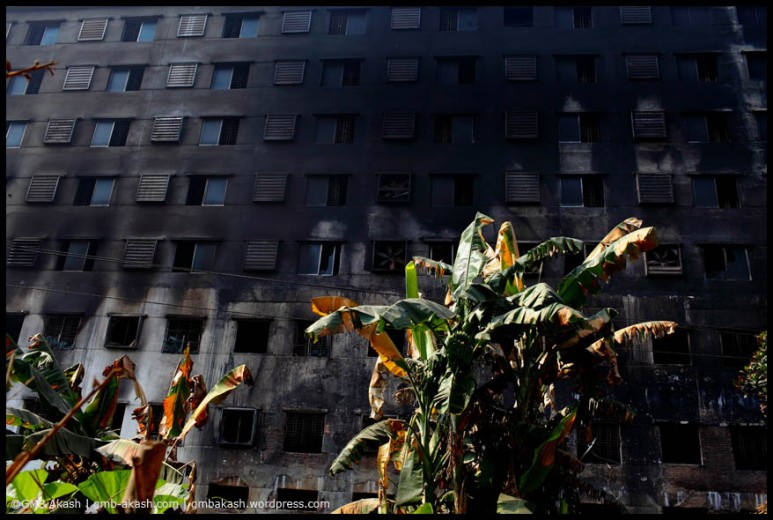 Raziv is one of the Survivors of the tragic incident; he worked at fourth floor along 300 other workers that evening.  He said, “I smelt smoke and ran downstairs at third floor and found that the place was already full with black fumes and I cannot breathe properly. With the sound of crying women the electricity went off within 5 minutes and most of the female workers had no mobile phone atleast to see though the phone light. I accompanied by my three friends & went at the small room of the third floor where I was atleast 200 woman were standing & crying helplessly. With another worker, I broke the window of the room and give the place to female workers to go out but most of them was so afraid and cannot do anything. I cannot be selfish to fly alone and helped them to jump through. But as soon as the fire was increasing I run to the biggest exhaust fan of the floor, many women workers seated at prayer and many started losing sense. Only by hand, I broke out the fan but cannot jump. The fire was so scary that I lost my power, I called and cried to my brother, he just said ‘Jump!Jump! Then I jumped to the roof of a shed next to the factory and found myself injured at the ground! I survived but I had no money for my treatment and no one asked me to help, even after five days of the incident I am searching for my coworkers and had not get any money for my treatment. I come to the factory for my four months due wages, no expectation from these rich bosses.” Along Raziv, Few more fire survivors said, that most victims died of suffocation as the blaze started on the ground floor warehouse, trapping the night-shift staff.

In hospitals cases are alike. Injured workers hardly save themselves form fire, some lost their memory, some are in trauma, poor families has nothing to give them better treatment. Amongst huge numbers of injured, few are receiving treatment and rests of the survivors are not fortunate to get treatment except lying at home for money crisis. A survivor Kushi stated that, after jumping from the third floor she broke her legs and cried at least one hour for help but no one was there and eventually she lost her sense.

Inside the living zone of these garments workers are not rosy. Jhilpar Slum is accommodating at least 20000-30000 textile workers and alike this slums garments workers living throughout all industrial hubs with daily straggles. Rooms of 10 feet by 10 feet accommodate minimum four women workers which monthly rent is 3000 tk. One toilet and one kitchen are definite for ten families of the slum. But still after having this trouble, passing through narrow life lines women garments workers are appreciating their lives as an independent being but incident like fire in Tazreen fashions has break out all hidden frustrations of them. 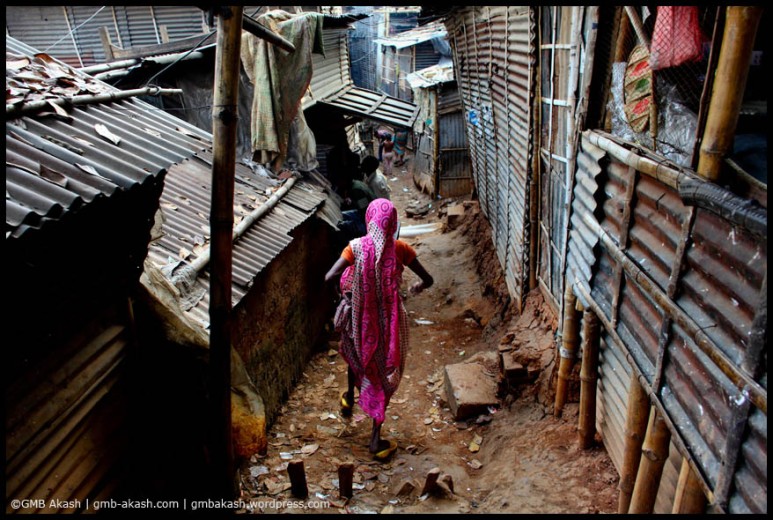 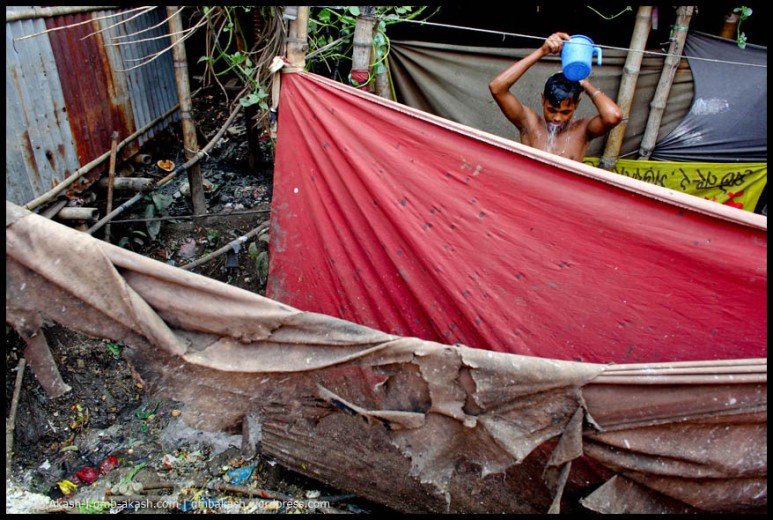 Accompanying workers in the fight for their deserved salaries I also faced problems with police officers. They tried to stop me for taking photos and said many times that I am ruining my country’s reputation. Even in many cases the injured, victim’s families and workers faced continual negligence by police, local authority even after so much pressure from national and international media and having consolation from all over the world they had to fight for their due salaries. End of the day they knows they have to fight for their right after losing their dears ones and even facing fire may be easier than earning rights and justice.

Nilufar lost four members of her family. While she received call from her brother, she heard only shout, ‘Save us!” ‘Help Us’! The phone was on the line for 20 minutes & she helplessly heard the sound of wounded peoples and their mourning. She passed the whole night in front of the factory gate along her two little brothers. While rescuers had lined up all the recovered bodies on the grounds of a nearby school, Nilufar unzipped bag after bag, searching her mother, father, brother and sister-in-law. She said the charred human remains looked like chunks of coal, but no where she found any dead bodies of her lost dear faces. Police wants ID cards of these four members then she replied, “I cannot found their burnt bodies after running three days, where the hell I would find ID cards!’ The tragedy does not end here; they have a long future to bear the wound with them with a tragic memory in mind.

“While leaving the place I heard, a mother exclaims that her son’s blood demand Justice. We all know their sweats, their bloods asking answers. No, we can’t stands at more loss. No Space for Further burials. Each drop of blood, each drop of worker’s sweat asks JUSTICE. Nothing more, nothing less” – GMB Akash

21 thoughts on “Ashes of Souls”