The small window is a passage to the world for Rebeka Khatun (22) since she rented the tin shed room two months ago. Living in hospital for ten months took most of her will power after the deadliest incident of her life. Now she does not think too much. But the silence of her tin shed rented room does not allow her to rest in peace. Idle Rebeka now thinks about the charger fan that  is restlessly cooling her. The inventor of the Dolphin charger fan might never have thought a garment factory worker could think about this fan for such long time. Yes, she wants to think different things now-a-days. She is tired of answering the same questions, tired of seeing unknown faces, tired of begging from people, tired of crying so long. She needs a break but from what she does not know.

When she closes her eyes her mother gently touches her cheeks. The mother who once made cow dung to feed Rebeka. The mother who wiped her tears when she cried and slept in hunger. Rebeka and her mother Chan Banu (45) had seen all the ups and downs in life. In the village they had to even beg to survive. Chan Banu did everything for her daughter Rebeka . She was life to her. Rebeka opened her eyes that were filled with tears and touched her right leg which itched all the time. There is no electricity for two hours and the restless Dolphin fan slowed down. Rebeka was sweating; the salted water flowed from her body, her eyes and maybe from her soul. The girl who started earning at the age of 15 never imagined her life without her mother and as a disabled person. She could not sleep the last two nights. Rebeka’s husband Mostafizur fanned her the whole night but pain is part of her existence now. Even when she opens her mouth only pain is visible on her face. 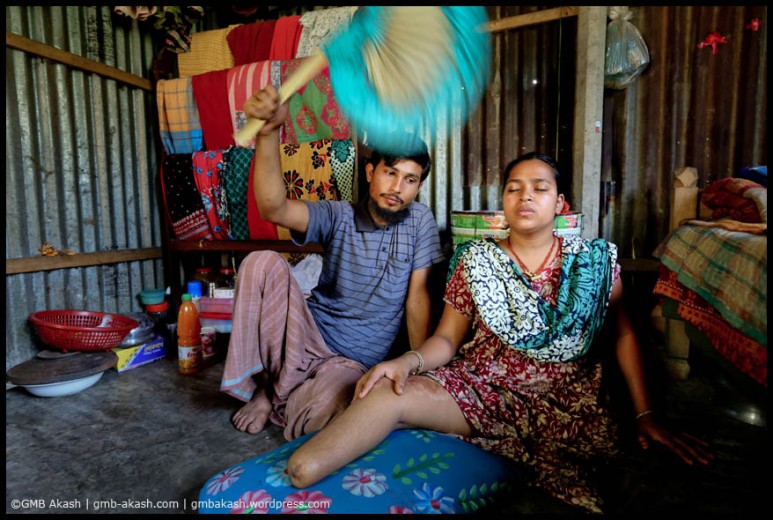 She lost her father in childhood. Her mother remarried just to save her from hunger. Fate did not take any right turns. After some years the mother and daughter moved to Dhaka with her two stepbrothers. Her stepfather’s only problem was Rebeka. But Chan Banu chose her daughter. Their struggle took them to the right place after so many years. That was to the garment factory. Thinking about the happy times unconsciously Rebeka slightly smiles. Her mother used to buy fishes for her after getting her salary. The last 12 months she and her husband’s life depended on charity. One year ago together they earned 22000 taka. Now the government assures her 10000 taka monthly as interest of her compensation that is hardly enough to live a disable life in the costly city of Savar. It’s been four years since Rebeka got married. She and her mother together joined Rana Plaza. They went everyday to their factory Ethar Tex hand in hand. One month before the biggest disaster ever she had a miscarriage. She and her mother cried a lot. Chan Banu said, ‘Don’t worry! Allah will give you happiness ma!’Huh! Happiness! Rebeka tried hard to turn her body around and her tongue dried. She had to ask her husband for a glass of water. Asking for help is now her only job.

Rebeka has gone through eight operations. Now she is mentally preparing herself for another. Depression is a minor word to express what Rebeka feels about life. Five members of her family died in the incident of Rana plaza. She was sewing the last piece of a pocket during the one hour left of her assigned work. She was about to go to the canteen to join her mother who was a peon in Ethar tex. After recalling the last glimpse of her mother she felt hollow. The mother who sacrificed all her happiness for her, she could not even hug her for the last time. She could not find her body. No DNA test matches. No compensation. No consolation.Disabled Rebeka is hoping for nothing. Life has treated her in the worst possible way. She just wants to know why Allah punished her! 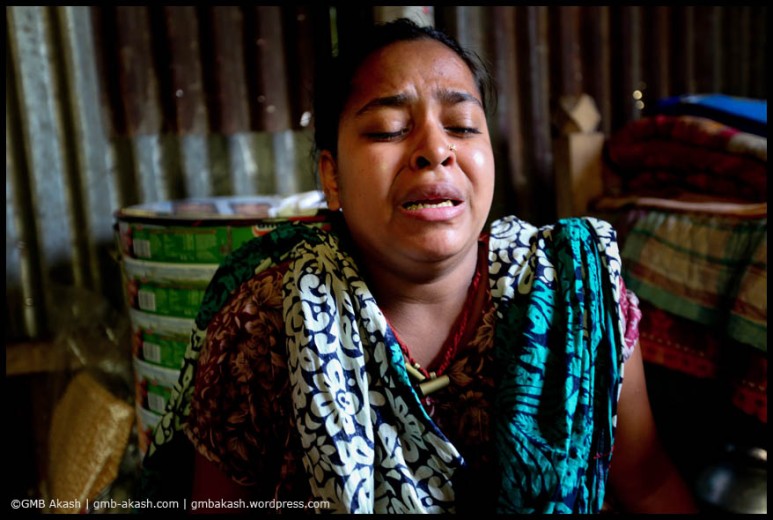 It is not only that daughters like Rebeka are crying for mothers. Hundreds of mothers are each day crying for their dead daughters. Hundreds of mothers are still roaming around in front of Rana Plaza after nearly twelve months after the incident by holding pictures of their dead children. On the day of the accident Romila Begum (46) combed her daughter Lovely’s hair and requested her not to go to garment factory. Romila  continued, ‘I am afraid Lovely, do not go for collecting the salary today. I will somehow manage our today’s food.’ Lovely had a fight with her husband and after leaving three of her sons to her mother she left for the garment factory . And never returned. 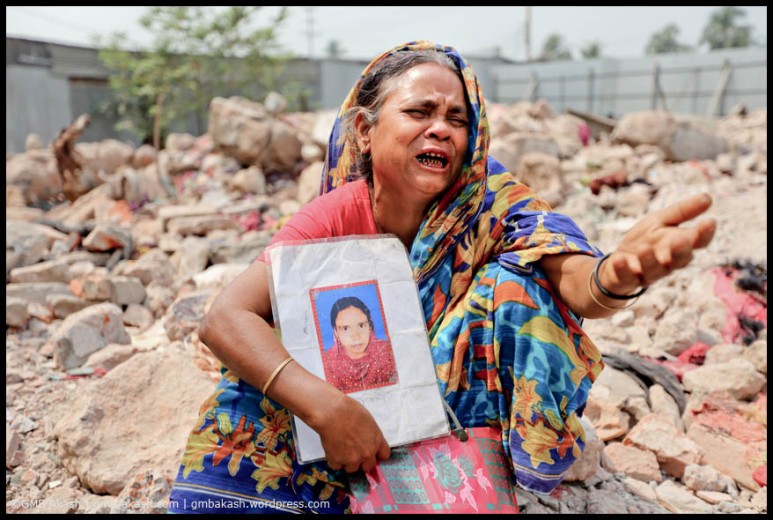 Clutching Lovely’s photograph at the site of the ruins, Romila fainted after saying, ‘My daughter gave her gold ring before leaving the house, and now how I will feed her sons and my family without compensation Allah!’ Ambia Begum who also came to join the demonstration by demanding compensation holds Romila. Ambia Begum harshly said, ‘You people will never understand our pains of losing children. Compensation isn’t charity, it is the right of my daughter’s blood’.

But the survivors who lost one or legs aren’t very hopeful with the compensation they got from Government. Rehana Khatun (24) was a sewing operator of New Star Ltd. at Rana Plaza. She had been rescued after 20 hours and had amputated two legs amputated six days after the incident. She said, ‘two years ago everyone in the family was against me taking a job in the garment factory. I left the village after my father’s death because I wanted to give a better life to my two younger brothers. When I started sending money back home they all became positive. I bought gold rings and a television for the family. I became the role model for my village.’ By telling these facts Rehana’s face suddenly gets depressingly dark by adding, ‘I do not want to go back to the village. Conservative villagers already told my mother that I ruined my life because I wanted to be independent woman’.

Rehana is not hopeful with the money the government gave her. Rehana said, ‘Interest of 1.5 million every month for two legs! But who will take care of me? Who will give this extra expense? I could have earned this money and have a good life at a lower cost if I were well. I want a way to run my life. I want a job that I can do in this situation.’

For Yanur the 1st term exam is more important than remembering Rana Plaza’s anniversary. She believes that she will be able to forget those unbearable scars of her muscle injury. She believes that she will be able to remember all the word’s meanings of her English book. She believes that she will one day forget pains of her chest and the memory of her mother. She believes that one day she will recover from the trauma and will no more cry for no reason. When Yanur rushes forward with the sharp sound of that scary crack-crack of the wheelchair, everyone understands Yanur is going to the William and Marie Taylor School that is inside the CRP (Center for the rehabilitation of the paralyzed) hospital from the hospital hostel. Talking about her present condition Yanur was looking through the little window of her small cabin keeping her favorite book Maxim Gorky’s ‘Mother’ aside. She softly whispered, ‘I missed mom a lot. I have five siblings. Poverty forced my mother to seek job in Rana Plaza at Ether TexLtd. Two years ago she found the job for me there too. We together worked and she used to say after some years we all will return to village with our savings.’ Introvert Yanur has had no frienda other then mother Anowara Begum. They found her body in the building after 17 days.

Anowara came to Dhaka with her family 18 years ago because of river erosion. Yanur’s father is waiting for compensation. He is coming every day to visit his daughter in CRP. For taking care of the five little children he recently got married. Speaking positively about her new mother, Yanur said, ‘What can my father do alone? He has to all the time take care of me. Our new mother is a little different from my mother. I am trying hard to accept her. Only it hurts a lot when I call her mom.’ 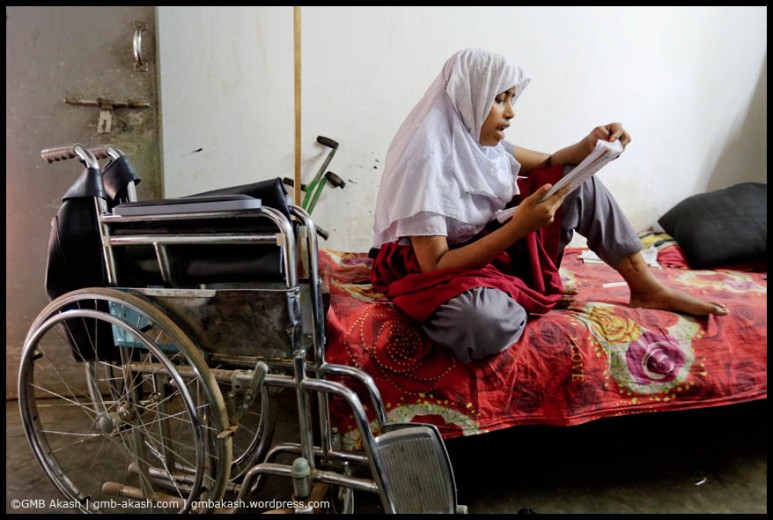 Now-a-days Yanur finds it hard to remember things. She has had a massive muscle injury in her left leg. She was in the emergency unit of Apollo Hospital for nearly a month. By touching Yanur’s new hair she sadly said, ‘I had long hair. My hair was under a pillar; my leg was opposite under another pillar. I heard people sucking each other’s blood in thirst. But I believed at that moment my mother was alive. After one month I knew she was dead. My father went everywhere for compensation and got three lakh for my mother and for me nothing.’ Yanur is trying hard to recover from her injury by attending physiotherapy. She wants to continue her education. Putting the English book on her lap she asked, ‘Who is responsible for my disabled life? I want to forget my scars, my right leg that I hardly can move; they said they will not give me money because I did not lose my legs. Can they imagine how bitterly I am living every day? I want to be well-educated; won’t they at least give me this opportunity?

Nearly twelve months have passed since the Rana Plaza collapsed in Savar on 24 April, 2013 ‐ one of the deadliest accidents in the history of the world’s industrial sector. This tragic incidence has pointed to the fact that workplace safety and security for workers, even in the globally competitive RMG sector of Bangladesh, is far behind the required standard. An industry in which 3.6 million women are working in Bangladesh, a job which brings liberty for women. The total number of deceased is the same for most of the noted organizations and so far 1134 dead have been reported. The numbers of victims initially buried without identification, prior to the DNA test results, were 291. The Rana Plaza tragedy resulted in an outpouring of commitments from governments, local and global institutions, groups and individuals. According to some reports, each family of the deceased and seriously injured received up to a million Taka 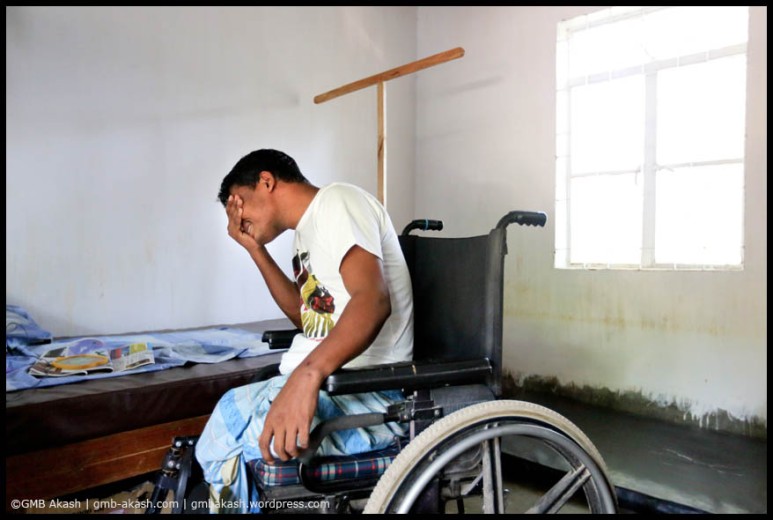