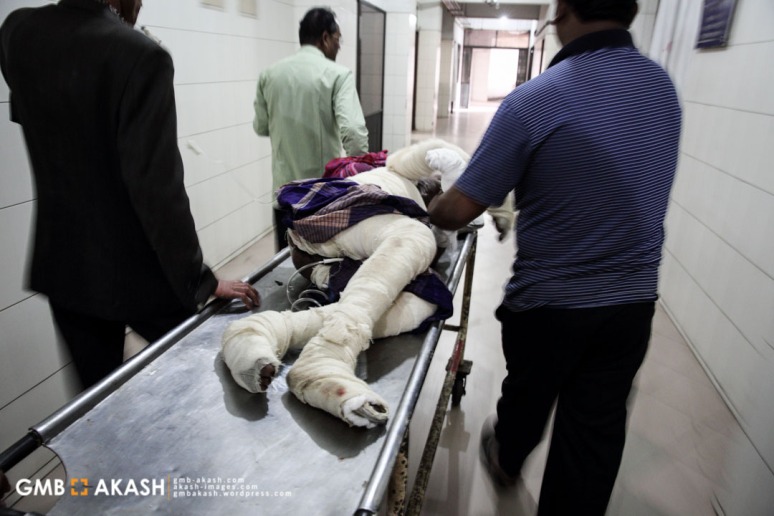 Now-a-days Beauty Begum (45) cannot remember anything. Even a few days ago she could remember everything, from her bazaar list to TV serial’s schedule. At present she is forgetting everything. In front of her eyes in the hospital bed lays the horrifically burnt body of her husband, Jamed (42). Somehow this is no longer affecting her. Now she is constantly thinking about the doctor’s prescription of eggs, lemons and malta’s increasing prices. Her savings of many years from their daily bazaar profits is now in the pennies. Now she worries about her husband’s job that he did for 15 years as a temporary employee. She felt helpless about the increasing price of eggs and lemons; she doesn’t know how to give courage to her terrified son who is supposed to attend the Secondary Board examination. She is overly concerned how to pay 2500 taka of her house rent. Moreover, the burnt body of her husband is repeatedly moaning in pain at night, not letting her sleep for a second. All in all, Beauty Begum is forgetting everything. 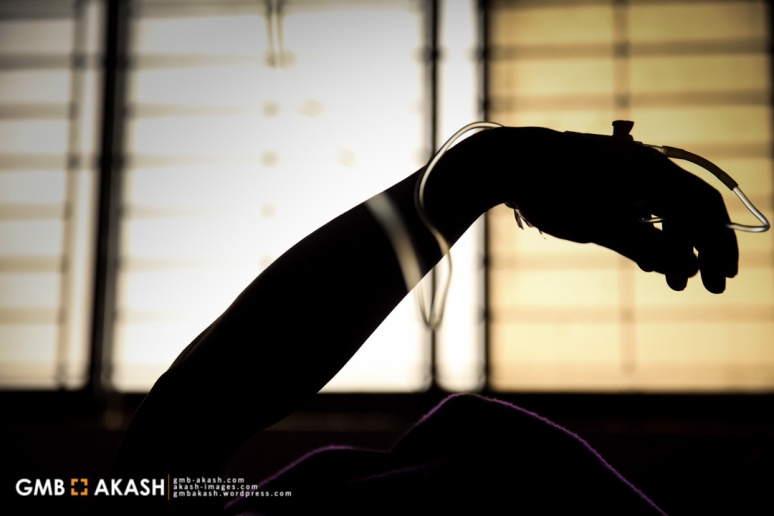 It is not only the middle class housewife, Beauty Begum who has been thunderstruck with this perverse reality. Labourer Jamir Ally’s wife Parvin, who came from a village, is as well speechless. Her eyes moisten while she feeds labourer Jamir Ally. Sometimes she gets scared to see how painfully the petrol bomb has burnt her innocent husband who has worked tirelessly just to feed their children. The labourer man who used to return home at night with their bazaar used to crack jokes all the time. Poverty never hit them as much as this disaster and happiness was always there in their wrecked house. Still now he wants to talk, wants to explain how horrible it was to be burnt with fire. Having deep pain in his eyes tired Parvin whispered, ‘Poor people have to go through a lot of difficult tests in order to survive in this cruel world.’ 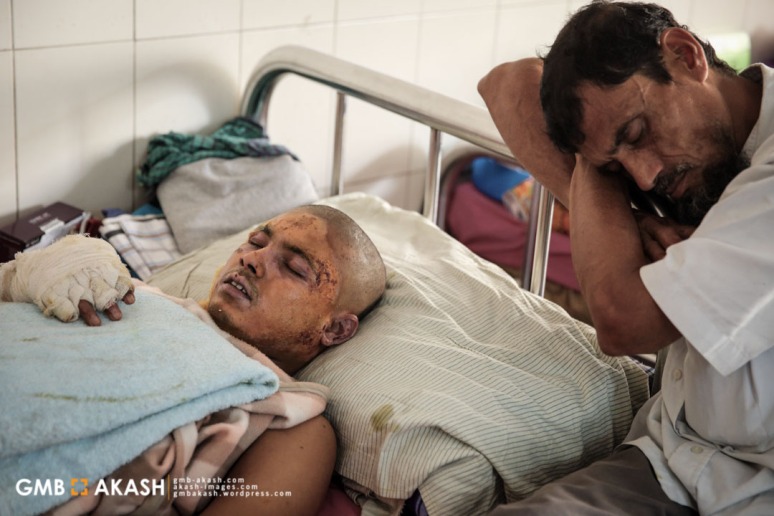 Dhaka Medical’s Burn Unit is only a temporary address for those who now do not know about the time, date or day. The constant unbearable pain, the smells of burnt infected flesh, the harsh dread running through the body and the uncertainty for the future: this is the present for innocent people who have been burnt by petrol bombs during the strike. One such victim, 20 year-old Nazmul expressed his terror to his mother by saying, ‘People burnt by petrol will not live long, will they, Maa?’ The mother who has not eaten or drunk anything for three days while Nazmul was in critical condition could not answer him properly just cried and said, ‘Your maa will die if something happens to you bazan (son).’ Wounded Nazmul came out from the burning bus by using his hands. On the 26th January the petrol bomb in the Jatrabari bus has devastated Nazmul’s future and life. Still Nazmul is dreaming of recovering; still he is trying to console his mother, and hoping to live a longer life. 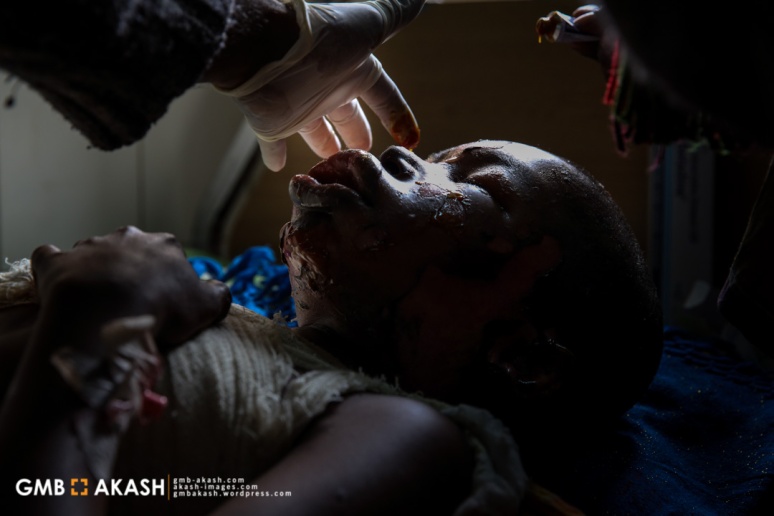 Like Nazmul, a lot of injured people are trying to believe in destiny. Mr. Billal (26) has given the name to his first child, ‘Sinha’. After getting married two years ago Billal thought life will take a right turn. A Petrol bomb has shattered his family, the future of their three month’s old Sinha and Billal’s entire reality. 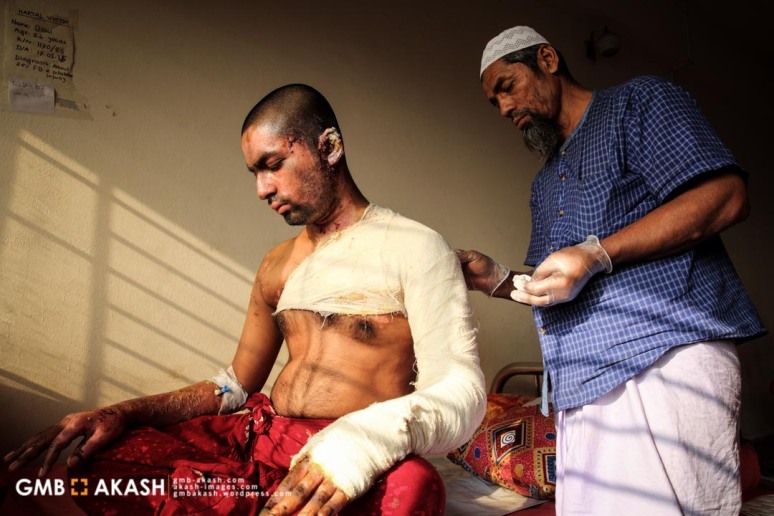 Beside Billal’s bed is pickup driver Najmul Islam who is shouting in pain, ‘I will die, please do something, please do something.’ Unmarried Najmul took a loan of 11 kah and bought a pickup van two months ago. During the strike a petrol bomb hit his new van and him. His past, present and future all is now in despair.

Gravely injured seventy year-old Abu Taher is constantly calling Allah, in pain he keeps continuing to say. ‘La Ilaha Illahallah’. In insupportable pain such an old man has been suffering days and nights. It seems pain has no end.

The white bed sheet of hospital has wrapped Alsam (19) very well. His mother is continuously fanning him, touching his head and hair, calling him and saying, ‘Have a look Aslam, see who has come to see you. Open your eyes bazan (son)’. Aslam’s mother continues to call him but he will never answer her again. Alsam went to another place; a place from where no one can answer. 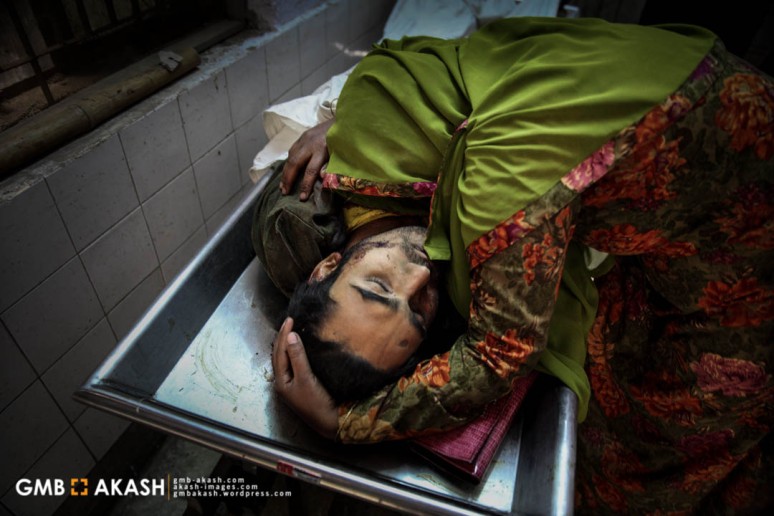 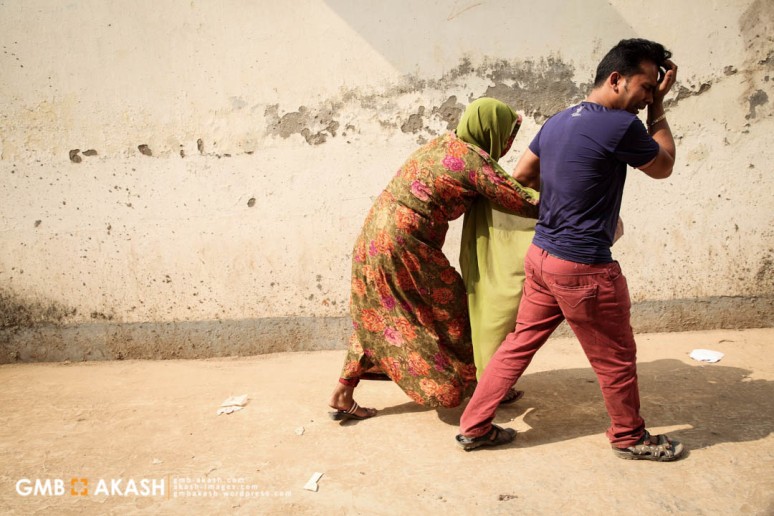 (Dhaka Medical College Hospital (DMCH), Burn Unit doctors said that most of the petrol bomb victims were burnt from 20 percent to 40 percent of their bodies. Out of a total of 111 patients who are having medical treatment in DMCH burn unit, 61 are in critical condition. A continuous blockade interspersed with hartals (general strikes) has been going on since the 6th January, 2015. It was called by the 20-Party Alliance demanding the resignation of the Awami League government which came into power through the one-sided election of the 5th January. The protests have become increasingly violent and nearly 1,000 vehicles have been torched or vandalized. The security forces have in turn arrested more than 10,000 opposition supporters while more than a dozen protesters have been shot dead, prompting allegations of a shoot-to-kill strategy.There has been an outbreak of violence and innocent ordinary people are being killed. Petrol bomb attacks on vehicles in Bangladesh are leaving people dead, destroying families and terrorizing normal society)