“Drinking tears now is a daily menu to the people whose life collapsed with the building Rana plaza. In a stormy day when I arrived at hospital door I pulsed by the melancholy I encounter. No rain was not the reason, it was the pain in ever face which will haunt everybody long. Following continual screaming of a young girl I found her requesting mother to a reluctant nurse. As soon as my camera clicks the doctor arrived swiftly, not sure seeing camera or may be reminding patients call! Looking at hundred wounded bodies and hearing their screams it was hard to stand in the middle. But it is more important to share a bit of their unbelievable suffering in a small form. Thus my camera take place and I share their pain among you all”- GMB Akash 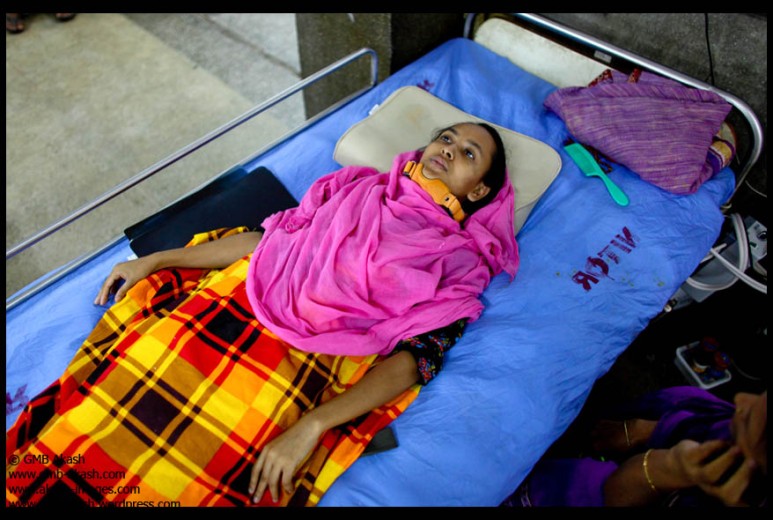 Khadeza (18) was a kind of girl who laughed more than she talked. Her mother used to beat her for excess laughing. Now everyday her mother asks Khadeza to smile for a while but Khadeza only wipe off. Doctor prescribes her not to do any hard work at least for next six months. She will not be able to do any hard job in future. Her mother is not sure how long it will take to recover. She is one of the survivors of Rana plaza. 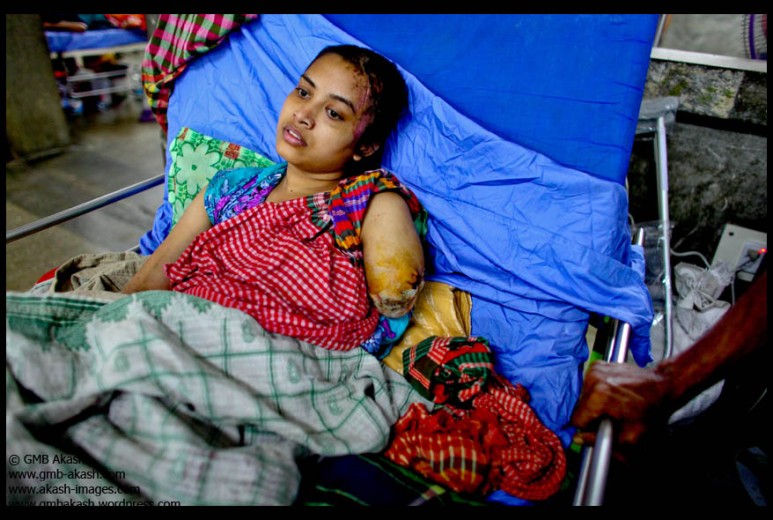 It will take three more months to get physical recovery and six months she will not be allowed to do any hard work. Eighteen years old Shapla was working in textile factory for three years. She was in third floor while rescuer rescued her. Her one hand cut off while she was inside. Living with Several scars in all over her body, she sometime cannot recall her name. Her Husband Mehedul was inside the building for 72 hours but he came out harmless. 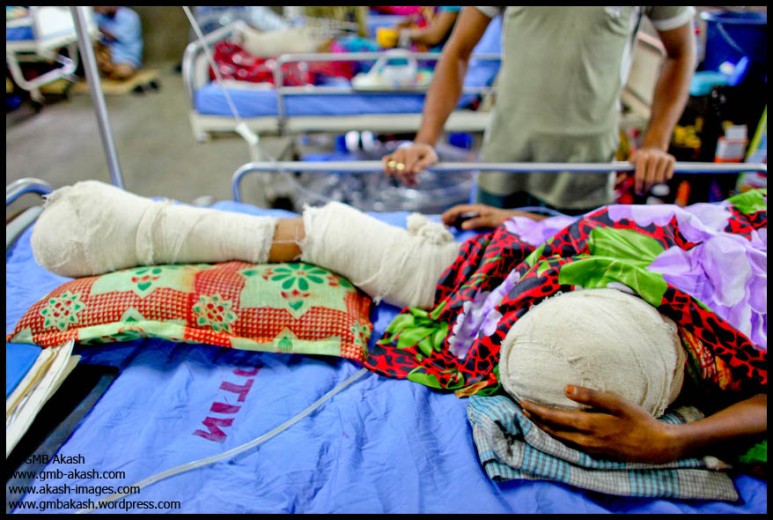 Rebeka (20) been rescued after two nights of the incident. Dead body of her colleague was stumbled on her shoulder for a night. People threw water from the only hole and she sip water from the floor. Doctors cut her one leg and another leg is badly injured. Still she screamed full night in imagining the hospital building is falling on her. Her husband is beside her but helpless. Her mother and grandmother who worked in the same floor are missing and she is unaware of the news.

Seeing them in the bed of hospital, no one can recognize that these workers – once upon a time used to work 7 am to 12am of the night. Life has treated them bitterest. Pains are unbearable to make anyone understand of it. Stepping out from the hospital I heard a woman telling that these workers will be much benefited. They will get 5 lac tk so this comes good for them. I can not stop myself and turn around, told her, can you cut off your hand if I give you 5 lac? I wonder how heartless some people can be!

My journey continues so as the rain. When I stepped in the residential area of Rana plaza’s garments workers, I met Isa Mia, a boy who lost his brother in the incident. Her mother was crying in the door and after 20 days of the incident she can not eat anything properly. Isa himself a survivors but not depending much he taken me to meet Marium, the single mother who lost her hand. One after another I meet with all. I have dedicated my fees to them which come from published textile stories in different publication of mine. I encounter the pain. the urge, the pathetic emotions which words can never justify. I want to believe one day will come when these people will see their life in the ray of a sweet dream. & then I realize this is non sense. The reality is they will suffer and this is destiny. But I will run to them again and again, until I can take in some of their tears. 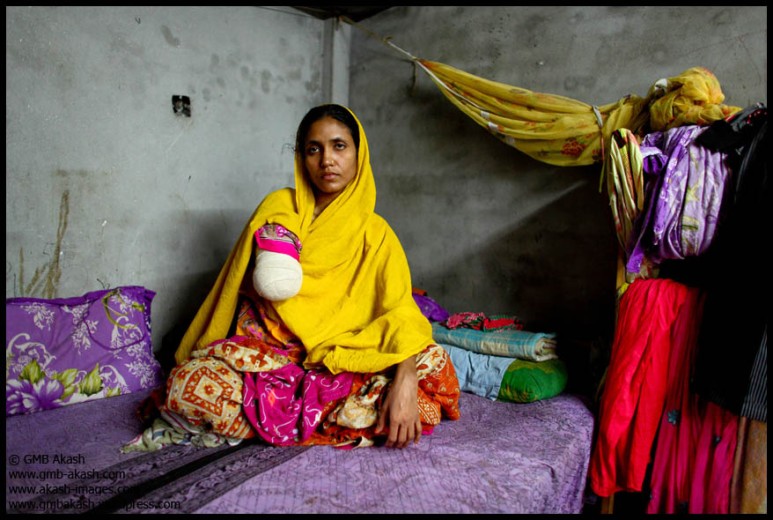 After losing her right hand Textile worker Marium (27) lost in despair. Single mother Marium never spends two tk for buying a hair band as she knows her two children’s future is in her hands. Disable Marium shouts at night afraid of feeling dead bodies of workers friends are circling her. She spent one night and two days in the 6th floor of the collapsed building while her right hand injured under pillar. She started her job four years ago in that time she received 1200 tk monthly, now she lastly get 4500 tk monthly wage in New Wave star Ltd. a factory which was in 6th floor of Rana plaza. She lost her stability to think about her future. Still after near one month of the incident she did not receive any compensation from anyone instead of her last month salary. 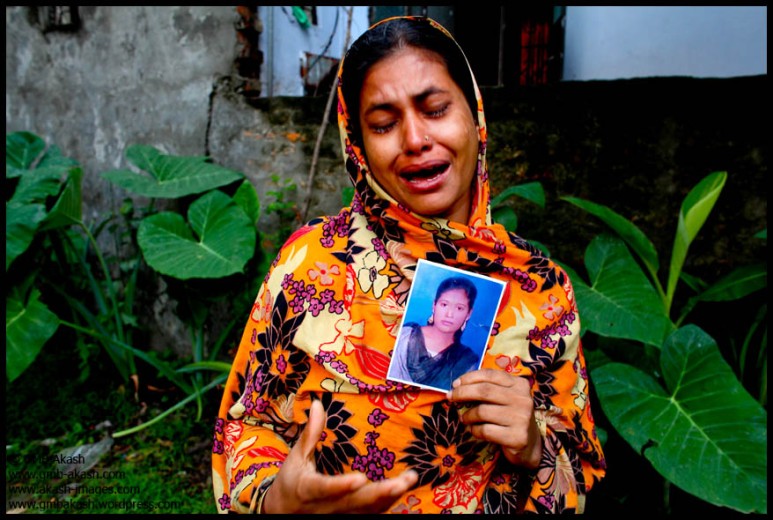 Blue is Aleya’s favorite color. In the morning she wore her new blue dress and told her young sister if she die who will wear the dress! Aleya’s (18) family was fully dependent on her income. She wants to educate her younger sister and alert her mother not to send her in textile factory. Heart patient father and kidney problem of mother forces Aleya to start work in her early age. Her mother asks her to married off soon but she reluctantly said straggle of her life will never come to an end. There was no money at home and she told her mother instead of dying in hunger it’s better to work in a cracked factory. She was sure God has given them enough sorrow and nothing will happen to her. Her believe proved wrong. Her family cannot even find her dead body parts after 17 days of searching everywhere. Neither have they received her salary nor compensation. 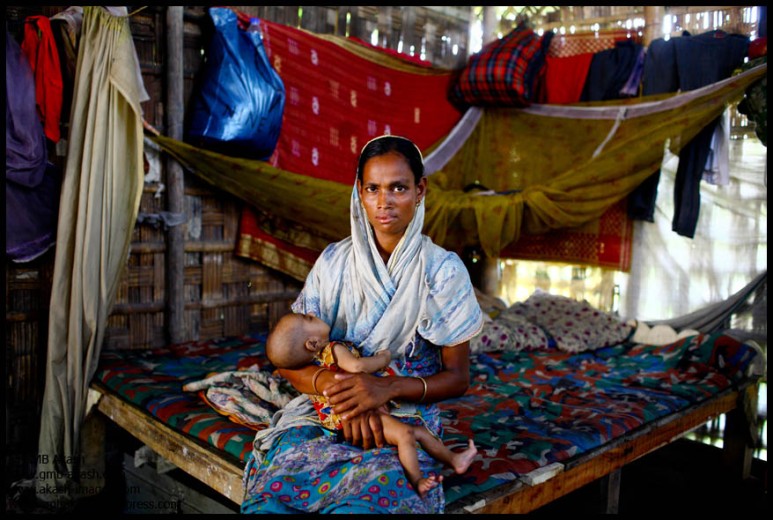 A room call home is never a place of relaxation for textile workers. Often a room shared by 5/6 workers offer them the untidy floor to sleep. Their salary won’t make them able to go in a better place still after 5-6 years of their job straggles. 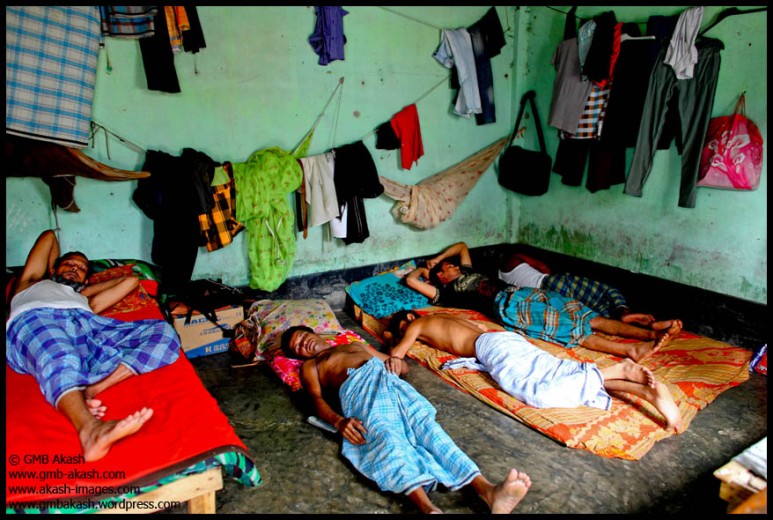 “Even after losing one leg in the terrible incident the worker is begging for a sewing machine. She said, “Still I have two hands. & my children are hungry”. Alike her thousands workers keeps their dreams alive in their heart and goes to work on time. In spite of everything they are straggling happily to get a dream future knowing dream is a dream. But they never imagine nightmares will replace their dream and they obviously fall in concrete mattress. Incidents of Tazrin/ Rana plaza might wake up them from their dream. But still they say, hunger is ugly than death”

32 thoughts on ““Factories of Death””