The sound of Monu’s footsteps compel us to look at him. It seems he is willingly trying to make the strange sound grab our attention towards his new gum boots. Before I speak to him, he shows all his teeth and enthusiastically says, ‘Bhaijan I bought them for 200 taka from the street. Bou (his wife) had washed them so well that I can see my face in them! Ha! Ha! Ha’

Before I compliment him something someone on my right side, Nibaron, who is Monu’s colleague of 15 years loudly said, ‘Hmm, does your new wife, still cry for you to drop the job, Monu?’ Monu recklessly replies, ‘Women are fools! She thinks tannery labourers die earlier. Allah is the one to decide. Women are crying party. Now I have these gum boots to protect me. She is happy and I am happy too!’

Monu got married to ‘Salma’ five months ago. Salma heard that tannery workers die at an early age, so she started requesting Monu to leave this dangerous job. But by doing this job for last 15 years, Monu, a 21 years-old man is surviving. He cannot imagine doing any other work than tannery nor is he capable of doing any other job.

The chronic cough he has or the rashes on his skin do not bother him anymore. Still he dreams of a better future with the 8000 taka salary. Now the dream is sweeter with his caring wife ‘Salma’.

Posing for the camera he said roughly, ‘By working in this hell, I am still alive. God might be giving me a long life bhai.’ 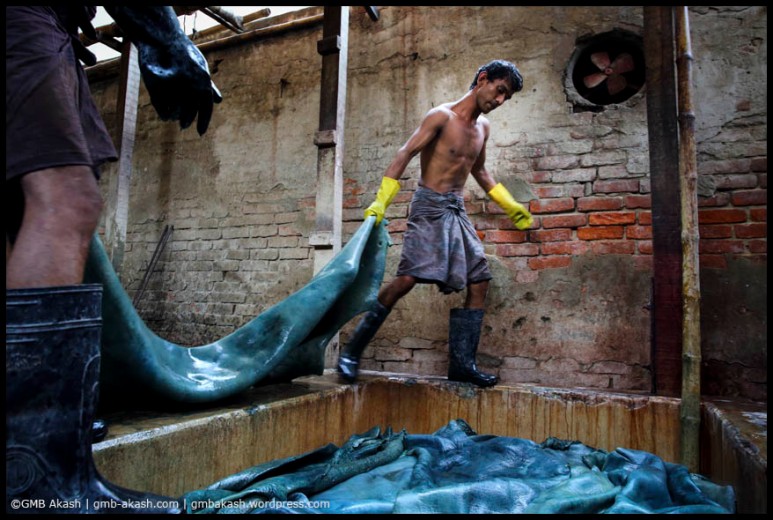 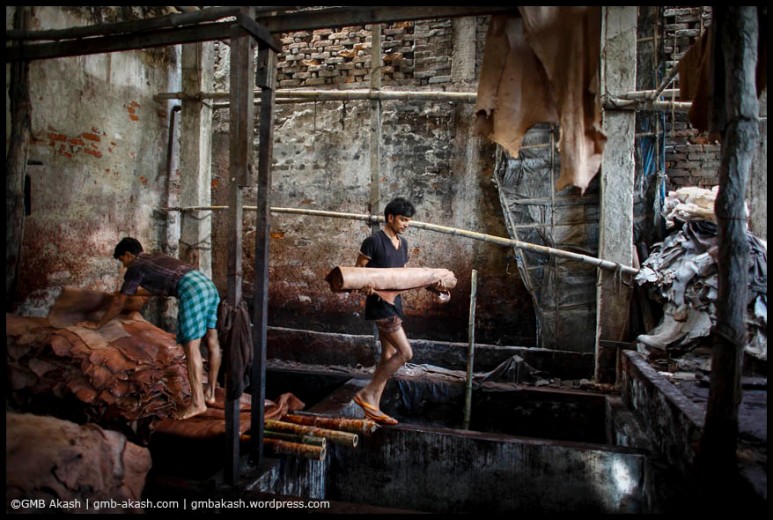 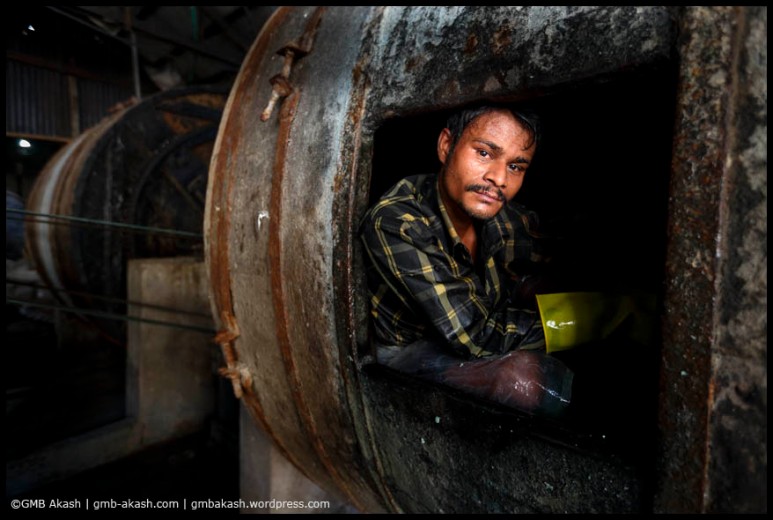 I have been taking photographs in this factory for many years. I cannot find many of the faces I used to know. When I inquire about them the common response I hear is that because of illness they moved to their villages with their families.

The repulsive smell on my body or the sticky chemicals on my favorite jeans does not affect me anymore; Just like Monu. Only when I return from this work and the rickshaw puller turns his head several times and at last wisely says, ‘Sir, you came from tannery!’ Then I realize I am also polluting the air. 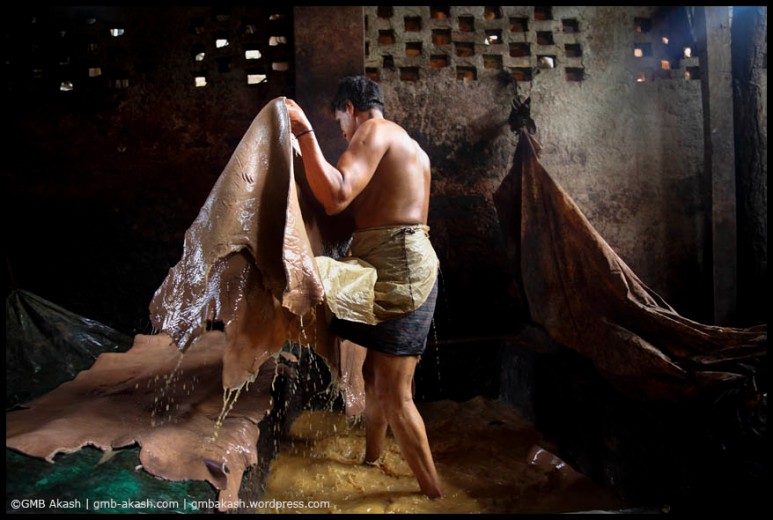 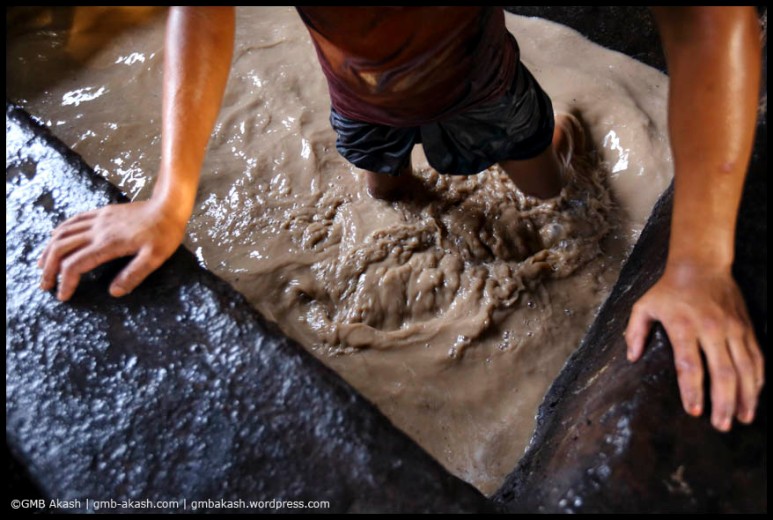 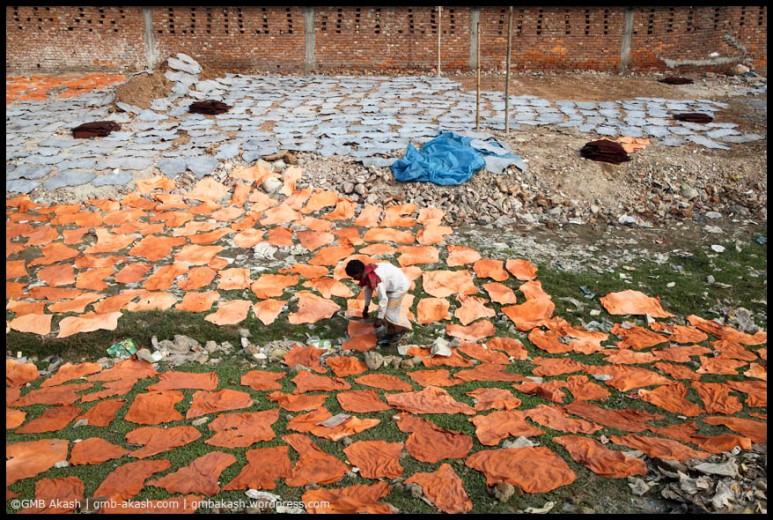 Like Monu many labourers believe that a pair of gum boots is their safe guard. Some of them tie gamsa (a traditional cotton towel) to save their lungi from the filth. But when they start working their sweat, factories chemicals, and raw leather shower them with poison and loathsome smells. A pair of gum boots and gamsa can not not save their hope to survive very long. 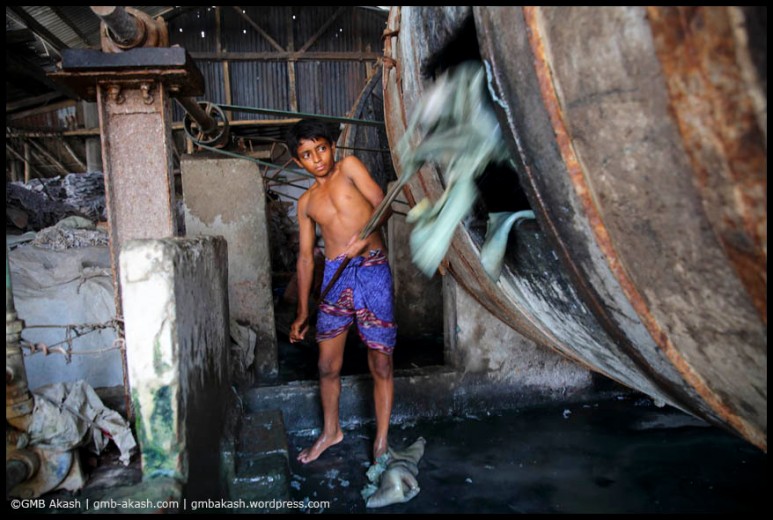 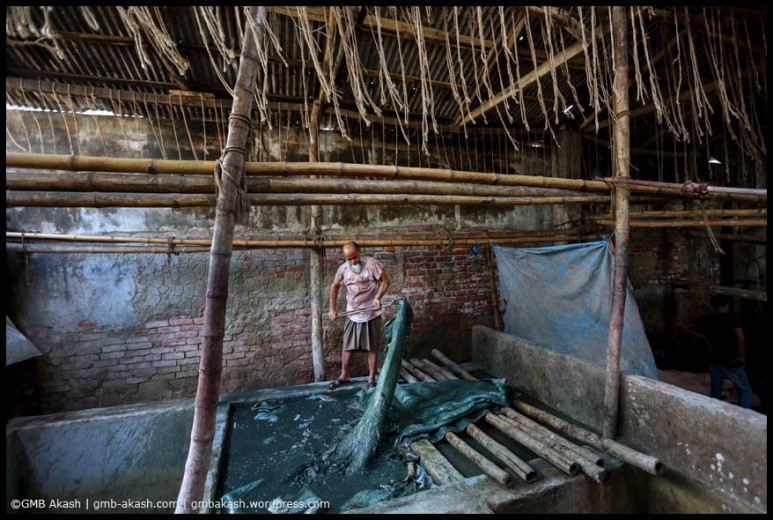 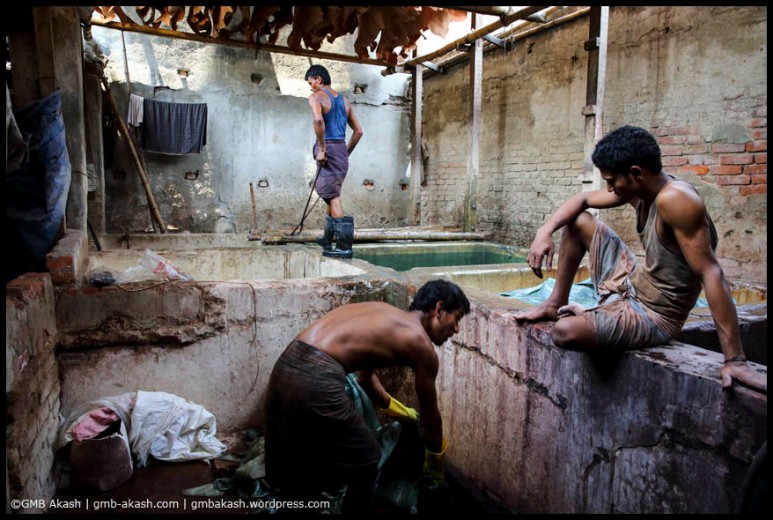 Every time I enter these deadly factories, I imagine that I am leaving the 20th century and have gone back 100 years in time. The ancient plan has neither fan nor any air circulation system. Thanks to those decades old broken bricks in the wall there ia a path for some fresh air. The leather hangs from the ceiling makes the air more toxic. The unstoppable giant drum keeps moving restlessly with raw leather pieces  and produces extreme laud noise. If fatigue overcomes labourer they fall asleep in the piles of raw leathers. Some labourers get a cigarette and take a break to see the sky outside. But the sky is dark and filled with smoke. The drain that is passing by is full of red chemical liquids that keep polluting the area and the mighty river Buriganga for 60 years now. 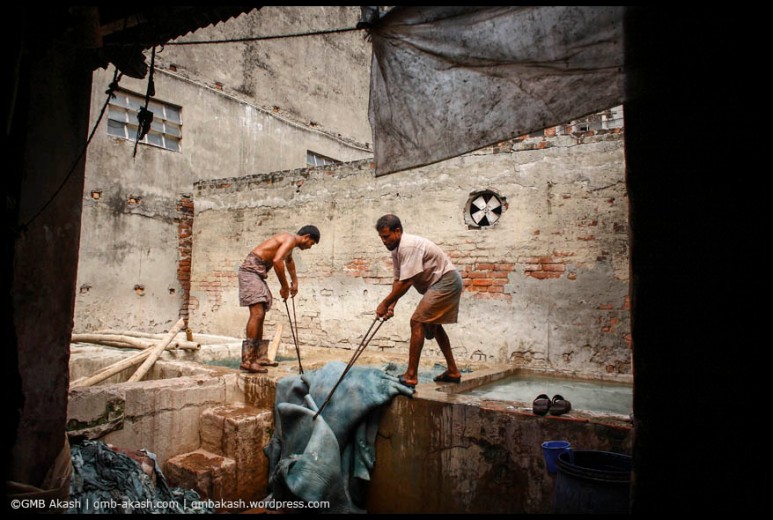 11-year old Rakib gives me the brightest smile and curiously asks, ‘What do you do with all these picture, sir?’ But he then rushes away before I can speak to him. Carrying uncountable leather pieces  in his shoulder he has no time for questions and answers. Rakib’s friend Monir (7-year old) keeps pinning up the leather at the yard. After the death of his father he got the job in his father’s factory. He had no idea what had happened to his father. He only knew he was suffering from an incurable disease. He feels good to work during the whole day and it is only in evening when his heart cry for playing. 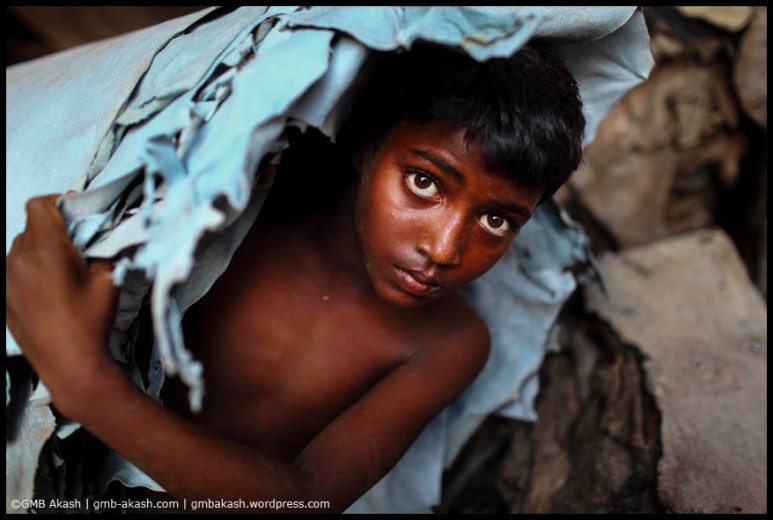 Standing beside Monir I was trying hard to understand their miseries but laughter broke my concentration. I saw a group of workers cracking jokes outside and were laughing hilariously. Life goes on. These simple people risking their lives everyday in order to live the best they can. Society is not actually willing to know about their sufferings but they are nevertheless  willing to buy their processed leather which leather has a good worldwide reputation. However the savles of the toxicity and repugnant odors have no good reputation. In their way home to to their slums they cannot sit in any tea stall to relax. People shout on them for their repulsive odors which disturbs everyone. Only their produced goods get place inside a branded shop with a prestigious tag ‘Made in Bangladesh’. The makers only receive humiliation.

Tannery worker Omar Faruk sadly says, ‘If we travel by bus nobody will sit beside us. One day a man harshly said to me, ‘You must come from hell.’ 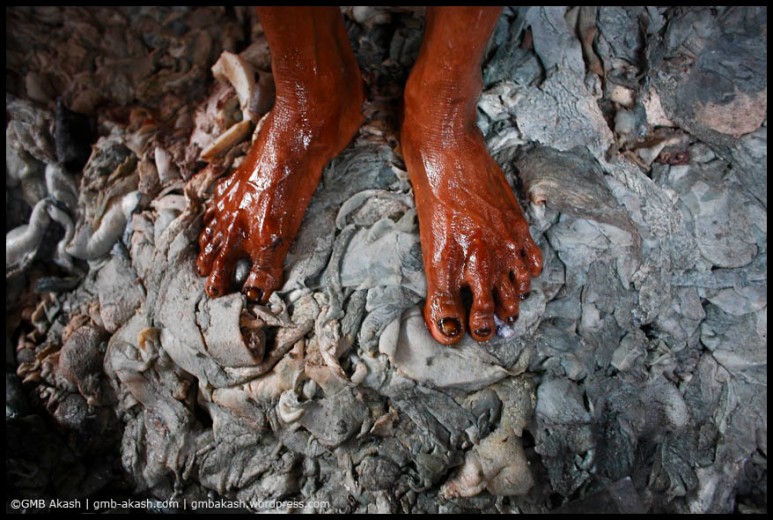 (Almost all of Bangladesh’s 200-plus tanneries are concentrated in Hazaribagh, a densely populated, filthy neighborhood on the banks of the Buriganga River in southwestern Dhaka. You can smell them long before you can see them: an unbearable stench like bad eggs, rotting fish and harsh ammonia. It’s almost impossible to walk through the tanneries without a scarf pressed to your nose. At almost $1 billion a year in sales, the leather industry is one of Bangladesh’s most profitable sectors. The lives of more than 20,000 tannery workers are still at risk. After 60 years of tannery operations, no one knows what content of toxins have been poured into the river, only that it is incalculable and staggering. Chromium sulfate, lead, organohalogens, lime, hydrogen sulfide, sulfuric acid, formic acid, bleach, dyes and oils all flow into the river)